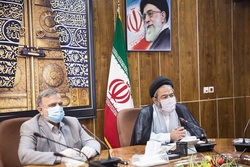 RNA – “Hajj, Spirituality, Solidarity and Islamic Power” has been chosen by Iranian Hajj ‎‎authorities as the motto of this year’s pilgrimage.‎

It was selected from 30 proposed mottos in a meeting of the Hajj officials on Tuesday, said ‎‎Hujjat al-Islam Sayyed Abdolfattah Navvab, the representative of the Supreme Leader of the Islamic ‎‎Revolution in Hajj and Pilgrimage Affairs.‎

He said spirituality is one of main objectives of Hajj, and with regard to solidarity and ‎‎Islamic power, the dignity and greatness of the Muslim Ummah in the face of challenges ‎‎have been taken into consideration.‎

At the meeting, the head of Iran’s Hajj and Pilgrimage Organization Alireza Rashidian said ‎‎the Saudi Hajj Ministry has not made a conclusive announcement about the upcoming ‎‎Hajj.‎

Iranian Hajj officials are prepared for different scenarios, according to the official.‎

Every year nearly three million Muslims from around the world gather in the holy city of ‎‎Makkah, Saudi Arabia, for the annual Hajj.‎

The annual pilgrimage is regarded as one of the pillars of Islam and the largest act of mass ‎‎pilgrimage in the world.‎

It is also a demonstration of Muslims’ unity and their submission to God.‎

Every able-bodied Muslim is obliged to perform the pilgrimage at least once in his or her ‎‎lifetime.‎

This year, given the outbreak of the novel coronavirus, Saudi Arabia has temporarily ‎‎suspended the year-round Umrah (minor Hajj) pilgrimage and there is uncertainty over ‎‎the annual Hajj.‎