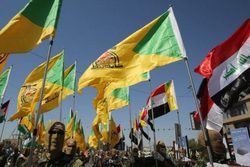 RNA – According to a statement by the Popular Mobilization Forces (PMF) on Tuesday ‎used mortar shells and artillery rounds to destroy a Daesh hideout near the Alas oilfields, ‎located northeast of Tikrit, the provincial capital of Salahuddin governorate, Iraq’s Baghdad ‎al-Yawm website reported.‎

In the western Makishifah district of the governorate, the popular forces also managed to ‎destroy several hideouts of the terrorists and clear the area of their remnants, it added.‎

Daesh has intensified its attacks in Iraq amid Baghdad’s call on the US to pull out its forces ‎from the Arab country.‎

The vote came two days after the US military – acting on US President Donald Trump’s order ‎‎– launched a fatal drone strike on senior Iranian anti-terror commander Lieutenant General ‎Qasem Soleimani upon his arrival in the Iraqi capital at the invitation of the Baghdad ‎government.‎

The attack also claimed the lives of Abu Mahdi al-Muhandis, the second-in-command of the ‎PMF, and eight other Iranian and Iraqi people.‎

Washington has threatened sanctions should US troops be expelled instead of heeding the ‎Iraqi parliament’s call to end the occupation of the country.‎

Iran Preparing Lawsuit against US for Assassination of General Soleimani