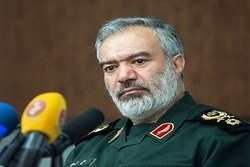 Lieutenant Commander of the Islamic Revolution Guards Corps (IRGC) Brigadier General Ali Fadavi said Iran has detailed information on the results of its recent missile attack on Ein Al-Assad airbase, but wants the US administration to admit the scope of the damages and number of casualties first.

RNA - Brigadier General Fadavi said on Saturday that Tehran has a large amount of information about Iran’s attack on the US Ain al-Assad airbase in Iraq but still advises Americans to come out and admit the damages to the base.

The Western world claims to advocate the freedom of access to information but it has denied people from enjoying their rights to information over the past years, Fadavi said.

The commander said that the hegemonic powers have no fear to tell lies if their interests so require.

He reiterated that all the aspects of Iran’s military attack on the US airbase in Iraq will become evident by the Americans themselves “in their partisan games”.

The hero of anti-terrorism war in the Middle East, Lieutenant General Qassem Soleimani was assassinated in a US drone strike on Baghdad International Airport in Iraq on January 3.

It was the first direct attack on the US army ever since the WWII.