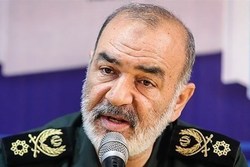 Commander of the Islamic Revolution Guards Corps (IRGC) Major General Hossein Salami expressed pleasure that the Islamic Republic is making astonishing progress despite all plots and obstacles created by enemies.

RNA - General Salami said on Wednesday that the Iranian people proved in Feb. 11 rallies that they will undoubtedly continue the path of revolution with power.

He added that a difficult path has been followed to consolidate the independence and dignity of this land, noting that despite all the conspiracies of the enemies, the Islamic Republic is at the pinnacle of glory and progress.

Iranian people from all walks of life took to the streets all over the country on Tuesday morning to celebrate the 41st anniversary of the victory of the Islamic Revolution in a show of continued support for their revolutionary causes and the Islamic establishment.

Millions of Iranians took to the streets today to commemorate the 41st anniversary of the Islamic Revolution in demonstrations across the country.

Hundreds of domestic and foreign reporters are said to be covering the Bahman 22 (February 11) rallies.

In Tehran, demonstrators congregated at the Azadi Square, the capital's main square and the site of major national rallies over the past three decades.

The rallies are crucially important this year as the event comes only a month after riots in a number of cities and towns across the country.

Led by the Founder of the Revolution, Imam Khomeini, Iranians confronted the forces of US-proxy Mohammad-Reza Pahlavi in late 1977 to end dictatorship rule in the country.

According to Fars News Agency, Ayatollah Ruhollah Khomeini returned from exile to Iran to be received by cheering crowds after the departure of the Shah in mid-January 1979. Two weeks later, the country saw the Islamic Revolution.

The final collapse of the Shah's regime came on February 11, 1979, when the military renounced its loyalty to the Shah and joined the revolutionary forces.

On this day 41 years ago, people took to the streets to celebrate the collapse of the Pahlavi Dynasty and the emergence of the new era.

Today, after 41 years, Iranians have turned out in the millions to mark the historic day once again, demonstrating their adherence to the principles and philosophy of the Islamic Republic.