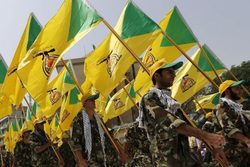 In December 2019, German lawmakers approved a non-binding ‎initiative calling on the government to ban the political Islamic Resistance ‎group, Hezbollah, in Germany which forms part of the Lebanese government.‎

RNA – In December 2019, German lawmakers approved a non-binding ‎initiative calling on the government to ban the political Islamic Resistance ‎group, Hezbollah, in Germany which forms part of the Lebanese government.‎

Germany has banned all Hezbollah activities on its soil, a spokesman for the ‎Interior Ministry said on Twitter, adding that security forces are currently ‎conducting raids against suspected members of the Lebanese movement in ‎several German states.‎

Germany had previously distinguished between the movement’s political arm ‎and its military units.‎

The move was praised by Jewish groups as a “much-anticipated and ‎significant” decision.‎

‎“This is a welcome, much-anticipated, and significant German decision. We ‎now hope other European nations will take a close look at Germany’s ‎decision and reach the same conclusion about the true nature of Hezbollah,” ‎said American Jewish Committee head David Harris.‎

In December 2019, German lawmakers approved a non-binding initiative ‎calling on the government to ban Hezbollah. The move, thought to be aimed ‎at combating anti-Semitism, has been rejected multiple times by the ‎parliament.‎

The resolution was greenlighted by the Free Democrats as well as the Social ‎Democratic Party, which is allied to Chancellor Angela Merkel’s Christian ‎Democratic Union (CDU). The decision sought to ban the political arm of ‎Hezbollah from Germany and to add the movement to the European Union’s ‎terrorist list.‎

Hezbollah is a Lebanese political party and Islamic Resistance group whose ‎primary basis of support is the country’s Shi’ah Muslim community.‎

The group was formed as a self-defence force in the early 1980s during the ‎Israeli occupation of southern Lebanon. The last major escalation between ‎Israel and Lebanon took place in 2006, when the two countries fought a 34-‎day war sparked by a Hezbollah cross-border raid and the kidnapping of two ‎Israeli soldiers.‎

The confrontation claimed the lives of over 1,300 people, including hundreds ‎of Lebanese civilians, and ended in a UN-brokered ceasefire. Israel and ‎Lebanon have fought a total of four wars since Israel’s establishment in ‎‎1948, and have repeatedly threatened one another with violence in recent ‎years.‎