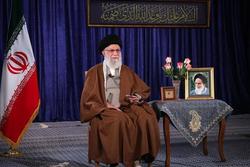 Leader of the Islamic Revolution Ayatollah Seyyed Ali Khamenei has praised the Iranian nation’s “shining” performance in the fight against the deadly coronavirus pandemic, which he described as a "test” facing the entire world.

RNA - Ayatollah Khamenei made the comments in a live televised speech on Thursday, marking the birthday anniversary of Imam Mahdi (PBUH), the Twelfth and last Shia Imam.

The Leader highlighted the sacrifices that the country’s medics have been making to help treat those infected with the disease — called COVID-19 — and rein in the outbreak, which he called a “modern plague” afflicting the world.

Ayatollah Khamenei said the greatest honor in this battle goes to the entire staff members of Iran’s healthcare system, who have “placed their own lives and health at the service of people.”

The medical society’s braveries, the Leader added, “will live on as a happy memory in the mind of this nation.”

Ayatollah Khamenei further praised the efforts being made by the health workers who entered the scene voluntarily to back up the fight against the virus, including Basij Forces, students and people from other walks of life.

The Leader also referred to the Armed Forces’ major contribution to the national campaign against the disease, saying they “spared no effort in the fields of science, construction and production of health and medical facilities.”

“New capacities were discovered, of which we had been unaware. It emerged that there exist great potentials both inside and outside the ranks of the Armed Forces,” the Leader added.

The Leader described the pandemic as a test for the world, including both governments and nations, adding, “The Iranian nation shone brightly in this coronavirus test.”

How Iran and West responded to crisis

Ayatollah Khamenei further compared Iran’s response to the fast-spreading disease to that of the Western states.

Ayatollah Khamenei pointed to some instances of the panic triggered by the outbreak in Western societies, which saw people flood the stores in their countries to stock up on essentials.

Footage broadcast on TV showed people engaging in fights over toilet paper or rushing to buy guns and ammunition as they feel a need to protect themselves and their families against potential threats, Ayatollah Khamenei added.

The Leader then underscored the public order in Iran, one of the countries hardest hit by the disease which first emerged in China late last December before spreading to other parts of the word.

Ayatollah Khamenei hailed the Iranian people for firmly adhering to the guidelines issued by the country’s health authorities to stop the virus spread, saying they even skipped popular Nature’s Day celebrations and chose to stay home.

Ayatollah Khamenei said COVID-19 is a “great problem” and a “big challenge for humanity,” although it is not that sizable “compared to many other problems. In the past, we had a lot of problems in our world and in our country, which were no less than this incident.”

As an example, the Leader pointed to the use of chemical weapons some 32 years ago by former Iraqi dictator Saddam Hussein which killed thousands of Iranians and his own people, adding that “all major world powers, of course, threw their support behind Saddam” in the crime.

‘Pandemic must not be a distraction’

The Leader further drew attention to the plight of the nations that have long been suffering under oppression and pressure in different parts of the world, including Yemen and Palestine, stressing that the pandemic should not divert attention from such major issues.

Ayatollah Khamenei also warned against the plots that the enemies have constantly been hatching against Iran, urging everyone to stay focused on the threat in parallel with efforts to tackle the pandemic.

Arrogant powers, the Leader warned, are “hostile to the principle of the Islamic Republic system.”