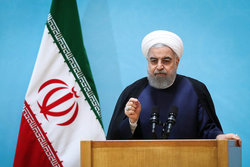 President Hassan Rouhani says terrorist measures taken by the United States against Iran actually target the entire nation to make Iranians give in to US demands.

RNA - Addressing a gathering of foreign ambassadors in Tehran on Monday, Rouhani said, “Today, we are faced with oppressive sanctions, [and] a terrorist measure by the United States against the entire Iranian nation. Nobody has any doubt that the US’ maximum pressure and [the policy of] sanctions take aim at each and every one of our people.”

Noting that the US sanctions against Iran have no precedent in history, Iran's president said, “They hoped that this maximum pressure would first bring [Iran's] statesmen to their knees and if they resisted, people would bend the knee. Both assumptions were erroneous; neither our people submitted to this pressure, nor our officials and statesmen.”

He added that those who are familiar with the region and Iran's history, culture and civilization know that “a great nation will never yield to bullying, unjust and wrong remarks as well as undue pressures.”

The US has been mounting its pressure on the Islamic Republic over the past 20 months on a daily basis, he said, adding that all Iran's economic indexes over the past eight months show that the country has managed to overcome the sanctions and that the Americans have been totally wrong in their calculations.

Tensions have been running high between Iran and the United States since May 2018, when US President Donald Trump unilaterally withdrew his country from the multilateral nuclear deal with Iran, officially known as the Joint Comprehensive Plan of Action (JCPOA), and unleashed the “toughest ever” sanctions against the Islamic Republic.

In response to the US’ unilateral move, Tehran has so far rowed back on its nuclear commitments five times in compliance with Articles 26 and 36 of the JCPOA, but stressed that its retaliatory measures will be reversible as soon as Europe finds practical ways to shield the mutual trade from the US sanctions.

Elsewhere in his address, Rouhani said the US has proven that it has not been and will never be committed to its political and moral obligations, adding, "This is the first blow to the US administration's prestige, because they have shown that they do not comply with international regulations."

The Iranian president emphasized that Washington's sanctions on supply of food and medicine to Iran run counter to all international regulations, saying that such US measures amount to an act of terrorism.

Rouhani said the US actions are a violation of United Nations Security Council resolutions including Resolution 2231, which endorses the JCPOA, adding, "The US has violated all [international] regulations and treaties and started [committing] a crime against a nation."

Elsewhere in his remarks, Rouhani pointed to Trump’s so-called deal of the century on Israeli-Palestinian conflict, saying it is a disgrace to the White House and the American administration, and constitutes another crime against the Palestinian and regional nations.

He added, "What the US is pursuing as the crime of the century is that it wants to keep the Palestinian people away from their country forever. This measure is a new disgrace to the White House as well as the American people and administration."

Defying international outcry, Trump in late January announced the general provisions of the plan that he has dubbed “the deal of century” at the White House with Israeli Prime Minister Benjamin Netanyahu at his side.

The ‘Vision for Peace’, which all Palestinian groups have unanimously rejected, would, among other contentious terms, enshrine Jerusalem al-Quds as “Israel’s undivided capital” and allow the regime to annex settlements in the occupied West Bank and the Jordan Valley.

Within just hours since its launch, Trump’s proposed deal aroused a storm of indignation and opposition among people and politicians as well as international organizations.

Leader of the Islamic Revolution Ayatollah Seyyed Ali Khamenei said on Wednesday that Trump’s pro-occupation plan will suffer demise even before the US president himself.

The Leader said, “The Americans are taking comfort in the belief that choosing a big name for the plot against the Palestinian nation will help it succeed.” This is while this “foolish and evil” scheme “has been working to their own detriment from the very beginning.”