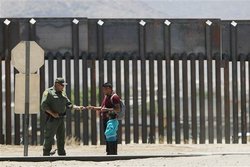 US President Donald Trump will request $2 billion in new funding for border wall construction in his 2021 budget, substantially less than he sought last year, according to senior administration officials.

RNA - The lower request, due to be unveiled on Monday, shows that the administration needs fewer new resources to build the wall along the US-Mexico border after it shifted resources to the construction project from the U.S. military.

The sum was first reported by the Wall Street Journal.

A year ago, the Trump administration asked Congress to provide $5 billion for the wall, on top of $3.6 billion to replenish funding the administration had taken from military construction projects.

At a re-election campaign event on Jan. 30, Republican Trump renewed his promise of the 2016 campaign to make Mexico pay here for the wall, part of his immigration policy to reduce the number of people entering the United States.

“Illegal aliens from Mexico are going to pay for the wall ... through remittance, 100 percent,” Trump said.

The White House on Monday will also propose a big jump in US government spending on artificial intelligence (AI) and quantum information sciences research and development in its 2021 budget proposal.