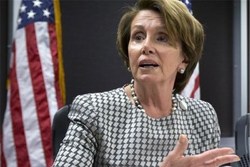 RNA - “With their vote, Senate Republicans embraced this darkest vision of power: that if the president believes his reelection is good for the country, then he can use any means necessary to win, with no accountability or consequences,” Pelosi wrote in an op-ed in The Washington Post.

The Senate on Wednesday voted largely along party lines to acquit Trump on charges of abuse of power and obstruction of Congress. Democrats announced that Trump overstepped when he pressured Ukraine to investigate political rivals, and obstructed Congress when he worked to hinder subsequent probes. Republicans said Trump’s conduct did not rise to the level of impeachment.

During the trial, Alan Dershowitz, a member of the president’s legal defense team, gave a wide berth to the legal boundaries around a presidential quid pro quo.

“If a president does something which he believes will help him get elected in the public interest, that cannot be the kind of quid pro quo that results in impeachment,” Dershowitz said on the Senate floor.

Dershowitz later backtracked, adding that the media was distorting his remarks.

Pelosi noted that Republicans’ defense of the president was a “betrayal” of the Constitution and opened the door to further misconduct by the White House.

“Sadly, because of the Republican Senate’s betrayal of the Constitution, the president remains an ongoing threat to American democracy," she wrote, adding, "He continues to insist that he is above accountability and that he can corrupt the elections again, if he wants to."

Trump has touted his acquittal in the Senate, repeating his past claims that the impeachment trial was a partisan “witch hunt” intended at overturning his 2016 victory.