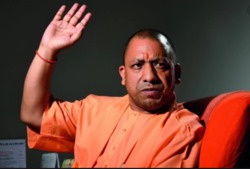 An Indian provincial chief minister affiliated with the government of Prime Minister Narendra Modi has been provoking anti-Muslim sentiments in his state.

RNA - Chief Minister of Uttar Pradesh Yogi Adityanath, who is known for promoting hate and violence against Indian Muslims, recently told orange-clad Hindutva supporters that the Muslims protesting a new citizenship law in the country were “terrorists” who should be fed with “bullets not biryani.”

He also described the thousands of women who have been rallying for weeks in the Delhi’s suburb of Shaheen Bagh in protest against the citizenship law as “terrorists.”

The controversial law allows granting citizenship to millions of migrants — with the exception of Muslims — who legally or illegally came into India from Pakistan, Bangladesh, or Afghanistan before December 2014.

“The protests happening at various places in Delhi are not because of the Citizenship Amendment Act,” Adityanath said. “They are happening because these people want to prevent India from becoming a global power.”

In the weeks leading up to the Delhi State elections, BJP candidates have been out in force in their most brazenly anti-Muslim campaign ever. They are desperately trying to defeat the ruling anti-corruption Aam Aadmi Party, which has secured 67 out of 70 parliament seats since the last elections five years ago.

The BJP has governed India on the national level since 2015, but it has suffered losses in Delhi State.

The top court, however, on January 22, refused to put the implementation of the law on hold, saying a constitutional bench of five judges should hear the petitions and rule on the matter. But it gave Modi’s government four weeks to reply to 144 petitions challenging the constitutional validity of the CAA.

In recent weeks, leaders from the BJP have called for action against demonstrators, describing them as unpatriotic.