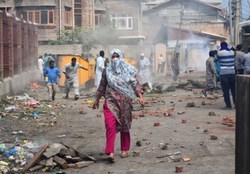 Days after Pakistan failed in its second attempt to garner international support on Kashmir at the United Nations Security Council (UNSC), Prime Minister Imran Khan urged the UNSC to insist that India allow supervision by the UN along the Line of Control.

RNA - Citing the increasing intensity and frequency of ceasefire violations by India along the LoC (de-factor border between India and Pakistan), Khan stated that the Indian leadership could attempt a possible "false flag operation" - a possible covert cross-border operation, RIA Novosti reported.

“As Indian Occupation forces continue to target & kill civilians across the LOC with increasing intensity & frequency, there is an urgent need for UN SC to insist India allow UNMOGIP return to IOJK-side of LOC. We fear an Indian false flag operation," noted Khan in a tweet on Sunday.

He also added that there is an urged need for the UNSC to pressure India to allow the United Nations Military Observer Group for India and Pakistan (UNMOGIP) to monitor ceasefire violations.

Khan also warned India that it won’t remain a mere observer to the increasing intensity and frequency of ceasefire violations.

“I want to make clear to India and the international community that if India continues its military attacks killing civilians across LOC, Pakistan will find it increasingly difficult to remain an inactive observer along the LOC," he added.

The two nations have accused each other of violating a 2003 ceasefire agreement over 3,000 times to date.

Tensions between the two nuclear-armed nations escalated after New Delhi took the decision to revoke Article 370 of the Indian Constitution in August 2018, which had ensured the special status of Jammu and Kashmir for decades.

Ever since the state was stripped of its special status, Pakistan has been on a diplomatic offensive on Kashmir, alleging human rights violations in the region.