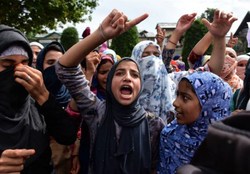 Pakistanis observed India’s Republic Day by releasing black balloons like this one into the sky and holding anti-India rallies.

RNA - Demonstrators in Islamabad, like those in Kashmir, believe India no longer shields the rights of its minorities after it adopted a series of controversial anti-Muslim laws in the disputed Kashmir region and inside India.

It all started last August when India ended the special status of Jammu and Kashmir and annexed the Muslim-majority territory. The annexation was in defiance of 11 UN Security Council resolutions which call for a plebiscite to let the people in disputed Kashmir decide on whether they want to stay with India or join Pakistan.

Over the past five months, the Indian- administered Kashmir region has been on lockdown with many political figures including three former chief ministers jailed after New Delhi deployed nearly 900,000 military and paramilitary forces to the region.

Islamabad has called for an international investigation into the situation in Kashmir. Kashmir has been split between India and Pakistan since their partition from Britain in 1947.