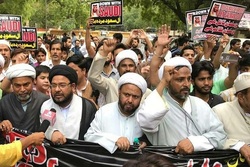 Clashes erupted between students and the police in the Indian capital of New Delhi over a contentious new citizenship law, which critics say is "anti-Muslim" and violates India's secular constitution.

RNA - Thousands of students gathered on Friday at the federally-run Jamia Millia Islamia university, raising slogans against the government as they began to march towards the parliament building, about 12km (7 miles) away, Al-Jazeera reported.

Police barricaded the university's main road to block the march, but some of the protesting students climbed over the barricades while others threw stones at the police officers, leading to the clashes.

Police fired tear gas and used baton charges to disperse the crowd. Dozens of students were detained and taken away in police vehicles, witnesses said.

The controversial legislation was cleared by the Parliament on Wednesday and approved by India's President Ram Nath Kovind a day later, despite widespread criticism by legal experts.

Protesters at the university alleged that scores of students, including women, were roughed up by the police.

"The protest was organised by the Jamia Teachers Association and was meant to be a peaceful protest. As the students started marching outside the campus in a peaceful manner, police resorted to baton charge and tear gas shelling," Nadeem Ahmad told Al-Jazeera.

"Jamia has turned into a war zone... They didn't spare anyone," he added.

"We are protesting today because it's about our future. It is about the future of India as a secular country," she said.

Similar protests were organised by various Muslim and civil society groups after Friday prayers in other parts of the country.

Manisha Sethi, a professor at Jamia Millia Islamia University, said the "whole idea behind the law is of a Hindu nation as imagined by India's far-right ideologues".

"So, it [the protest] is a kind of civil disobedience movement that has started and it seems to be the only way forward at the moment," she told Al-Jazeera.

The new citizenship law has already triggered significant protests in the Northeastern Assam state, where demonstrators said it would convert thousands of undocumented immigrants into legal residents.

On Thursday, at least two people were killed in Assam when police opened fire on mobs torching buildings and attacking railway stations in protest against the rules.

The Assam tensions led to the cancellation of a visit to India by Japanese Prime Minister Shinzo Abe, who was due to hold summit talks with his Indian counterpart Narendra Modi.

Meanwhile, the United Nations human rights office on Friday voiced concern that the citizenship law is "fundamentally discriminatory in nature" and called for it to be reviewed.

The new law does not extend the same protection to Muslim migrants as to other religious minorities, thereby undermining India's commitment to equality before the law, enshrined in the Constitution, UN Human Rights Spokesman Jeremy Laurence said.

"We understand the new law will be reviewed by the Supreme Court of India and hope it will consider carefully the compatibility of the law with India's international human rights obligations," Laurence said during a news briefing in Geneva.