No place for Israel to be established on Palestinian lands 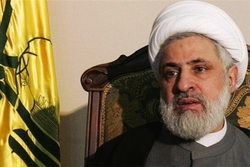 A high-ranking official of Lebanon’s resistance movement, Hezbollah, says there is no place for Israel within the recognized borders of Palestinian lands, dismissing US President Donald Trump’s so-called deal of the century on the decades-old Israeli-Palestinian conflict as “void and unsuccessful.”

RNA - A high-ranking official of Lebanon’s resistance movement, Hezbollah, says there is no place for Israel within the recognized borders of Palestinian lands, dismissing US President Donald Trump’s so-called deal of the century on the decades-old Israeli-Palestinian conflict as “void and unsuccessful.”

“The (so-called) deal of the century is a void and unsuccessful plan. Trump crafted it only for the sake of electoral gain in America and to help (Israeli Prime Minister Benjamin) Netanyahu secure more votes inside occupied Palestinian territories,” Hezbollah's Deputy Secretary General Sheikh Naim Qassem said on Sunday.

He added that the Palestinian nation together with resistance movements in the region will not let the deal proceed, and will not allow the Tel Aviv regime to occupy Palestinian lands and legitimize its occupation concurrently.

“There is no place for Israel within recognized borders. The only place for Palestine to be established is the entire Palestinian soil from the river to the sea, with (the entire Jerusalem) al-Quds as its capital and not simply its eastern sector. We believe such an ideal will materialize, but it needs some sacrifices and time,” Sheikh Qassem pointed out.

“While some people have described the (so-called) deal of the century as a grave calamity, it is also such an unjust and dangerous plan that neither Palestinians nor Arab and world leaders have agreed to it, and have termed it as not viable. This proves that it is a dangerous deal and not suitable for the resolution of the Palestinian issue,” the top Hezbollah official added.

On Tuesday, Trump unveiled his so-called deal of the century, negotiated with Israel but without the Palestinians.

Palestinian leaders, who severed all ties with Washington in late 2017 after Trump controversially recognized Jerusalem al-Quds as the capital of the Israeli regime, immediately rejected the plan, with President Abbas saying it “belongs to the dustbin of history.”

Thousands of Palestinians in the occupied West Bank and besieged Gaza Strip poured onto the street in immediate condemnation of the plan.

Palestinian President Mahmoud Abbas has said "a thousand no's" to the plan.

"After the nonsense that we heard today, we say a thousand no's to the deal of the century," Abbas said at a press conference in the West Bank city of Ramallah, where the Palestinian Authority is headquartered.

He said the Palestinians remain committed to ending the Israeli occupation and establishing a state with its capital in east Jerusalem.

"We will not kneel and we will not surrender," Abbas said, adding that the Palestinians would resist the plan through "peaceful, popular means".

Hezbollah has called the plan a “deal of shame,” said it was a very dangerous step which would have negative consequences on the region's future.

It also said the proposal would not have happened without the “complicity and betrayal” of several Arab states.