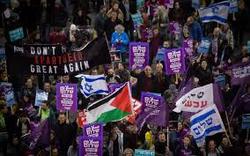 Protesters carrying Palestinian flags marched through Tel Aviv on Saturday, protesting against the so-called 'Deal of the Century,' presented by US President Donald Trump, who claimed it would facilitate a peaceful resolution of the Israeli-Palestinian conflict.

RNA - People marched through the streets, holding a portrait of Trump and Israeli Prime Minister Benjamin Netanyahu hugging, with banner, reading, "Don't make apartheid great again." "We came today to demonstrate against [an] annexation plan of Trump and Netanyahu.

This plan is very bad for both Israelis and Palestinian and one of the worst things about it is that it enables deporting Arab citizens and taking away their citizenship," said Hila Aloni Ochaion, one of the protesters.

Trump recently unveiled his much-hyped plan, a set of proposals to end the Israeli-Palestinian conflict, alongside Israeli Prime Minister Netanyahu in Washington DC.

Palestinian President Mahmoud Abbas rejected the plan with "a thousand no's," as being one-sided in favor of Israel.