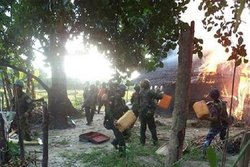 The International Court of Justice (ICJ) has ordered Myanmar to do everything in its power to prevent the genocide of Rohingya Muslims in Rakhine, where state-sponsored violence has prevailed in recent years.

RNA - The UN's highest court in a ruling on Thursday ordered Myanmar to take urgent measures to protect its Rohingya population from atrocities.

Abdulqawi Ahmed Yusuf, the presiding judge, said that "the court was of the opinion that the Rohingya in Myanmar remain extremely vulnerable" and needed to be protected from further bloodshed.

Yusuf said the court was not satisfied with Myanmar's own efforts "to facilitate the return of Rohingya refugees present in Bangladesh, to promote ethnic reconciliation, peace and stability in Rakhine State, and to make its military accountable for violations of international humanitarian and human rights law."

The court ordered Myanmar to "take all measures within its power to prevent the commission of all acts" described by the 1948 UN Genocide Convention.

These acts included "killing members of the group" and "deliberately inflicting on the group conditions of life calculated to bring about its physical destruction in whole or in part."

The court also rejected arguments made by Myanmar's de facto leader Aung San Suu Kyi in The Hague in December and set out urgent steps for Myanmar to end the violence.

It ordered the Southeast Asian country to report back within four months, and then every six months after that.

The court also told Myanmar to prevent the destruction of any evidence of crimes against the Rohingya.

In November last year, the mainly Muslim African state of the Gambia asked the ICJ to impose emergency measures following a 2017 military crackdown by Myanma that sent hundreds of thousands of Rohingya fleeing into neighboring Bangladesh.

Gambia's Justice Minister Abubacarr Tambadou on Thursday hailed the court's decision to uphold his country's case, which was supported by the 57-nation Organization for Islamic Cooperation (OIC), Canada and the Netherlands.

"This is a historic day today, not just for international law, for the international community, but especially for the Rohingya," Tambadou told reporters outside the court.

Suu Kyi -- who was widely criticized for her defense of the same military that once locked her up for years -- said on Thursday that some Rohingya Muslim refugees may have "exaggerated" the extent of the abuses.

The Myanmar military dodged questions in the capital Naypyidaw on Thursday morning, with a spokesman telling reporters it would simply "follow the instructions of the government".

The result was also hailed in the Bangladeshi camps where some 600,000 Rohingya people still remain.

"When the international court made its ruling today, I felt the gate of justice had been opened. I have the first taste of justice," Mayyu Ali, a Rohingya author and poet, said from Cox's Bazaar in southeastern Bangladesh.

Rights groups also hailed the ICJ ruling while calling on the international community to put pressure on Suu Kyi and Myanmar.

“The ICJ order to Myanmar to take concrete steps to prevent the genocide of the Rohingya is a landmark step to stop further atrocities against one of the world’s most persecuted people,” said Param-Preet Singh, associate international justice director at Human Rights Watch.

“Concerned governments and UN bodies should now weigh in to ensure that the order is enforced as the genocide case moves forward.”

Thousands are suspected to have been killed in the crackdown and refugees brought widespread reports of rape and arson by Myanmar's military and local Buddhist militias.

The number of refugees at overcrowded camps in Cox’s Bazar has swelled since August 2017, when a military-led crackdown in Myanmar, which UN investigators have said was conducted with “genocidal intent,” prompted some 740,000 Rohingya to flee to Bangladesh, which was already hosting some 200,000 Rohingya when the exodus began.

Citizenship is at the heart of Rohingya demands for a return to Myanmar.