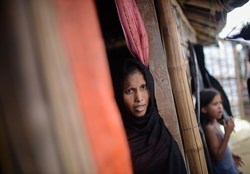 It’s been more than a decade since the persecuted Rohingya refugees have been camping in several parts of Indian subcontinent after fleeing a vicious army-led crackdown in Myanmar.

RNA - They say things have been better off in India and they feel safe and lucky to be living here despite hardships. However, they are terrified amid their deportation threats and now a new immigrant policy announced by the Indian government has shaken the community.

Earlier this week the Indian government approved a citizenship bill that grants Indian nationality to all immigrants residing in the country over a certain period of time. The bill however excludes the immigrant from Sri Lanka, Nepal and Myanmar.

This citizenship amendment bill was part of the election manifesto of Prime Minister Modi’s ruling BJP in 2019 general elections which the leader swept with the absolute majority. Observers say the bill is a part of larger agenda of the ruling party to transform India into Hindu nation.

Critics have questioned the scope of the bill calling it discriminatory as it aims to grant nationality on the basis of religion. They say the bill is against the Indian constitution which guarantees right to equality.

According to Press TV, Rohingya Muslims have been described as the world’s most persecuted community by the United Nations. Thousands of them have long been trying to rebuild their shattered lives in the temporary makeshift camps In India.

The community is concerned about the future as the Indian government calls them illegal immigrants who are threat to security and considers deporting them. Now this new citizenship bill makes their lives even harder as they say they belong to nowhere.