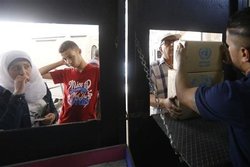 A Palestinian NGO says the economic loss imposed on the Gaza Strip as a result of Israel’s blockade of the impoverished enclave is estimated to stand at nearly 100 million dollars a month.

RNA - “The crises of the economic sector are directly caused by the Israeli siege imposed on the coastal enclave since 2007,” Jamal al-Khudari, head of the Popular Committee Against Siege (PCAS), said on Saturday.

Khudari, who is also a member of the Palestinian Legislative Council (PLC), added that a total of “4,000 factories, workshops, shops and companies have closed or shrunk their activities by more than 80 percent of their operational capacity over the past years … due to the Israeli siege.”

He highlighted that the remaining companies, shops, factories, and economic facilitiesare currently operating with less than 50 percent of their operational capacity.

Khudari also said that 85 percent of Gazans are living under the poverty line, calling on the international community to pressure the Israeli regime to end its blockade on the coastal sliver.

Israel has also launched three major wars against the enclave since 2008, killing thousands of Gazans and shattering the territory’s already poor infrastructure.

Earlier this week, a UN report said the Israeli regime’s occupation has cost the Palestinian economy more than 2.5 billions of dollars on a yearly basis for the nearly past two decades.

The report by the United Nations Conference on Trade and Development (UNCTAD), titled 'Economic cost of the Israeli occupation for the Palestinian people: Fiscal aspects' said that the total fiscal loss for the Palestinian government between 2000 and 2017 was estimated at $47.7 billion.

The report added that the figure is almost thrice the size of the Palestinian economy in 2017, and it comprises lost public revenues and interest payments.

It said the amount would have been enough to eliminate the Palestinian government's $17.7 billion budget deficit over the same period, but would have also generated a surplus nearly twice the size of the deficit.

The UN report also highlighted that the Palestinian economy would have generated 2 million job opportunities over the 18-year period, an average of 111,000 jobs each year, if the $48 billion fiscal costs were not lost but instead injected through expansionary fiscal policies.