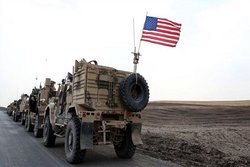 The US is transferring the ISIL terrorists to Iraq to pave the ground to force the Iraqi parliament to take back its approval for the expulsion of the American military forces.

RNA - "Washington is transferring several ISIL ringleaders who have been trained at its bases in Syria, specially in al-Tanf and Hasaka, to Iraq," Karim al-Khikani told the Arabic-language al-Ma'aloumeh news website on Sunday.

He added that after relocating the ISIL terrorists, Washington will attempt to introduce Iraq to the UN Security Council as the first threat to the global security to pave the ground for its forces' long-term deployment in the Arab country.

Al-Khikani called on the Iraqi government to further equip the security forces and sign agreements with China or Russia to buy reconnaissance balloons and thermal cameras to monitor the terrorists' moves at borders.

In relevant remarks in February, Iraq's security experts disclosed that the US Army was training ISIL terrorists in Al-Anbar province after relocating them from Syria to Iraq to prepare them for creating insecurity in the country.

"The US Army troops are preparing and training the ISIL militants in al-Qadaf and Wadi al-Houran regions of Al-Anbar province with the aim of carrying out terrorist attacks and restarting insecurity in Iraq," al-Ma'aloumeh quoted Kazim al-Haaj, an Iraqi security expert, as saying.

According to Fars News Agency, he noted that according to the intel obtained from Iraqi security forces in Al-Anbar province, the US had transferred the ISIL terrorists on Apache and Chinook helicopters to Iraq.

Pointing to the occupation of several regions in Western Iraq, including Wadi al-Houran and al-Qadaf, al-Haaj reiterated that the US Army was using this opportunity to deploy the ISIL terrorists after training them in areas where it plans to make hot.