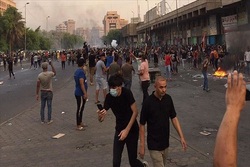 A senior Iraqi legislator ruled out the image portrayed by the US and Saudi propaganda machine to claim that protest rallies in Iraq are aimed at Iran, stressing that protesters are only demanding the government to improve their economic and political situation.

RNA - "The demands of participants in the peaceful protests merely pertain to the situation in Iraq," Fazel al-Fatlawi, the representative of Sadiqoun fraction at the Iraqi parliament, told the Arabic-language Baghdad al-Youm news website.

He added that the protestors have economic and political demands, including reforming the elections law, early elections and election of a prime minister for the transition era.

Al-Fatlawi said the Americans insist that the protest rallies are held against Iran, but "we, as the representatives of the Iraqi nation reject such claims and we are opposed to turning our country into a center for the US clashes and conflict with Iran".

According to Fars News Agency, Iraqis angry at the government's slow pace of reforms ramped up their protests, sealing the streets of capital Baghdad with burning tyres and threatening further escalation unless their demands are met.

Protesters blocked roads in Iraq's capital and in the holy city of Najaf a day before their deadline to the government on making progress on reform pledges expires.

The Iraqi protesters have given the government one week to announce its reform measures.