Merits of Gen. Soleimani in Fight Against Daesh Unquestionable 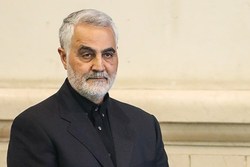 The short-sighted actions by the United States that led to the death of Islamic Revolution Guards Corps (IRGC) Qods Force Commander Lieutenant General Qassem Soleimani will result in a sharp escalation of the situation in the Middle East, the Russian Defense Ministry announced.

RNA - "The short-sighted steps by the United States that resulted in the killing of Qasem Soleimani lead to a sharp escalation of the military-political situation in the Middle East region and to serious negative consequences for the entire global security system," the defense ministry said in a statement.

It added that long before the US-led coalition, Soleimani had organised armed resistance to the Daesh (also known as ISIL or ISIS) terrorist group and al-Qaeda in Syria and Iraq.

"His personal merits in fighting against Daesh on Syrian territory are unquestionable," it stated.

The top commander was martyred in a targeted assassination attack by US aircraft at Baghdad International Airport early Friday morning. The airstrike also martyred Abu Mahdi al-Muhandis, deputy commander of Iraq's Popular Mobilization Forces (PMF), or Hashad al-Shabi. The PMF media arm reported that the two were martyred in an American airstrike that targeted their vehicle on the road to the airport.

The attack came amid tensions that started by the US attack on PMF units that killed 28 Iraqi popular forces. A day later, Iraqi people attacked the US embassy in Baghdad. On Wednesday Trump ordered about 750 US soldiers deployed to the Middle East.