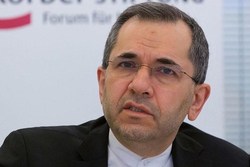 Iran's Ambassador and Permanent Representative to the United Nations Majid Takht Ravanchi lambasted the UN Security Council formation which mostly serves Westerners’ interests, adding that the current paradigm is facing a legitimacy and credibility crisis that has to be addressed through reforms.

RNA - Speaking before a United Nations General Assembly meeting in New York entitled “Question of equitable representation on and increase in the membership of the Security Council and related matters,” Takht Ravanchi criticized the structure of the 15-member Council, which is mostly dominated by western countries and, arguing that it needs to be expanded in a balanced way.

"Geopolitically, the Council is dominated mostly by Western countries, three of which have veto power, and geographically, while WEOG (the Western European and Others Group) is overrepresented, the main regions are poorly represented in terms of number and have less rights and privileges in terms of veto power or permanent membership," the envoy said in his speech.

"To date, one-third of UN members have never found a chance to become a Council member while there have been 20 countries that have each served between 10-22 years in this body," he said.

Takht Ravanchi said this "disproportionality and injustice must be addressed and rectified", including by limiting chances for those who have served more and, instead, providing more advantages to those who have never served in the Council or served less times.

"This is essential in ensuring equal opportunities for all States to become a Council member as well as in preventing the domination of a certain regional or geopolitical group over the Council," he argued.

The ambassador said the Council’s reforms should ensure that its members decide based not on their own national interests but based on the common interests of the entire UN membership.

"The Council must also stop increasing the excessive and expeditious resort to its Chapter VII functions. For instance, it has imposed sanctions in situations where no action was even necessary," he said.

"Chapter VII must be invoked as a measure of last resort, if necessary," Takht Ravanchi noted.

For several years, the Islamic Republic of Iran remained under sanctions based on a Resolution passed by the UN Security Council enacted under the Chapter VII of the UN Charter, until the Resolution 2231 endorsed the 2015 nuclear deal between Tehran and world powers, and took the country out of the Chapter VII. It sets out an inspection process and schedule while also preparing for the removal of United Nations sanctions against Iran.

According to Fars News Agency, Dehqani made the remarks in a meeting with Director-General for Multilateral Affairs of the Belgian Foreign Ministry Axel Kenes, whose country is a non-permanent member of the UN Security Council, in Tehran on November 13.

During the meeting, Dehqani criticized the UNSC for its Secretariat's reports on implementation of Resolution 2231 that has been released without showing any attention to the US repeated violations of the nuclear deal and the resolution, and stressed the need and importance of the opposition of the UNSC member states to the US unilateralism and instrumental use of the UN bodies.

He also referred to the UNSC's unilateral approach on issues like Yemen and its insufficient attention to the humanitarian dimensions of such crises, calling on Belgium as a non-permanent member of the UNSC to make more efforts to resolve them peacefully.