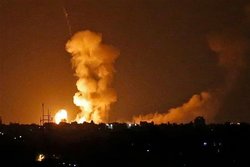 RNA - In a statement issued on Tuesday afternoon, Mousavi strongly condemned the “terrorist act” of the “Israeli regime” in martyring one of Islamic Jihad commanders and emphasized the need to bring to justice and punish “the occupiers of Palestine” in international courts as war criminals.

The spokesman also pointed to the silence and inaction of the international community against the “Zionist regime's” aggression and terrorist acts, saying, "Unfortunately, in light of the support for this ruthless and child-killing regime, its crimes and assassinations of Palestinian people and fighters inside and outside the occupied lands continue."

He further called on the regional and international community and international bodies to fulfill their human and legal duty and responsibility to stop “the terrorist acts of the Quds occupiers” and protect the defenseless and oppressed Palestinian people.

The Israeli Army announced that the assassination was coordinated between the army and the general security and that it was endorsed by the Israeli Premier Benjamin Netanyahu.

Another strike on a Damascus home belonging to an Islamic Jihad official killed the man’s son, in what appears to be part of an Israeli operation to assassinate leaders of the Palestinian resistance group in Gaza and Syria. The Islamic Jihad issued a statement on Tuesday confirming the attack, identifying the official as Akram al-Ajouri, member of the group's political bureau.

The al-Quds Brigades and the Hamas resistance movement vowed a major response to Abul Ata’s assassination by the Tel Aviv regime, which was the first such attempt since the 2014 Israeli war on Gaza.

According to Fars News Agency, the armed wing of the Jihad Movement stated that Abul Ata was killed in a “cowardly assassination attempt. It promised an “earthshaking reprisal”, adding that the “criminal enemy will bear the responsibility for the results of such aggression”.

The Hamas Movement has also mourned Abul Ata, stressing that the Israeli crime will not go unpunished.

In a statement, Hamas held the Israeli occupation fully responsible for all the consequences resulting from such military escalation, affirming that the assassination of Abul Ata would be retaliated.

Gaza has been under Israel’s all-out siege since 2007 and witnessed three wars since 2008. Tel Aviv seven-week-long war in 2014 and two other military operations over the last six years have caused economic losses close to three times the size of Gaza's gross domestic product. The latest onslaught claimed the lives of over 2,200 Palestinians and left over half a million more displaced, with another 11,000 injured in the assault. It also severely damaged more than 20,000 homes, 148 schools, 15 hospitals, and 45 clinics. At least 247 factories and 300 commercial centers were rendered inoperable or totally destroyed in the attack.

Why Israel seeks to start war on Gaza with strikes on Islamic Jihad leadership?