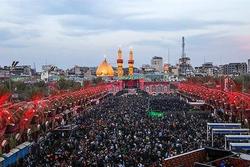 Huge processions have been held in the Iraqi holy city of Karbala as millions of mourners commemorated Arba’een, the 40th day after the martyrdom anniversary of Imam Hussein (PBUH), the third Shia Imam.

RNA - Images showed tens of thousands of pilgrims descending upon the shrine of Imam Hussein in Karbala as Araba’een culminated on Saturday.

Starting since a few days before Arba’een, hundreds of different religious mourning processions, usually representing different communities and tribes of pilgrims from Iraq and around the world, passed by the golden-domed shrines of Imam Hussein and his half-brother Abbas ibn Ali (PBUH).

The pilgrims mourned and chanted slogans commemorating Imam Hussein's martyrdom along the way.

Due to the large amount of pilgrims present during the ceremonies, processions usually take several hours to enter and exit the areas adjacent to the shrines.

The ceremonies in Karbala came as pilgrims flocked to the holy city for more than two weeks, many of whom trekked about 70 kilometers northward from the holy city of Najaf in a symbolic gesture honoring Imam Hussein.

In one of the symbolic processions, 3,000 university students mourned Arba'een at the University of Tehran before walking on foot toward the Imam Khomeini Hussaniya in downtown Tehran to meet with Leader of Iran's Islamic Revolution Ayatollah Seyyed Ali Khamenei and join him in mourning the day.

In a brief address to the meeting, the Leader warned that the global arrogance and hegemonic powers are using their numerous propaganda machines to portray evil as good and evil as good.

More than thirteen centuries ago, Imam Hussein was martyred along with dozens of his companions during a last-stand battle against the tyrant of the time, Yazid I.

Imam Hussein is consequently a highly-venerated figure remembered not only among Shia Muslims but also among Sunnis and people of other faiths.

The Arba’een walk to Karbala commemorating Imam Hussein has been a longtime tradition among Shia Muslims, specifically in Iraq.

The tradition was largely abandoned after being prohibited during the despotic rule of deposed Iraqi dictator Saddam Hussein.

Annual Araba’een ceremonies have, however, been revived in recent years, with about 20 million pilgrims visiting Karbala according to recent statistics.

The turnout of Iranian pilgrims during this year’s event went beyond 3.5 million pilgrims, topping previous records, according to Iranian officials.

Up until six years ago, only a maximum number of 35,000 Iranian pilgrims were reported to have taken part in any year during the event, marking a stark contrast with recent participation levels.

Participation numbers from other countries have also increased in recent years, with tens of thousands entering Iraq notably from countries such as Pakistan, Afghanistan, Azerbaijan, Turkey and Lebanon.

On Tuesday, prominent Iraqi Shia cleric Muqtada al-Sadr called on his followers to take part in Saturday’s Arba'een processions to denounce the United States and Israel.

The gesture comes against the backdrop of a few tense days of anti-corruption protests across Iraq earlier this month.

Certain Arab media outlets have reported that a US-backed plan sought to provoke the protests in a bid to spark instability in the country.

Observers believe the timing of the provocations demonstrated that foreign-backed elements were seeking to undermine the Arba’een processions, specifically by fueling antagonism towards Iran.

The protests, however, have largely receded since last week.

On the official Twitter account of Ayatollah Khamenei, a posting last week said an enemy plot seeking to “sow discord” between the two nations of Iraq and Iran will fail.