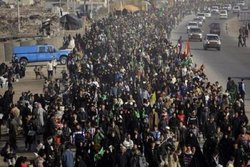 People in Iran and other countries throughout the world mourned on Arbaeen (40th day of mourning for Imam Hossein after he was martyred on the day of Ashoura over 13 centuries ago).

RNA - Millions of Muslims in Iraq who rallied from the city of Najaf to the city of Karbala arrived in Karbala city on Saturday to mark the Arbaeen.

Huge numbers of Iranian Muslim pilgrims also walked towards the holy city of Karbala for the annual Arabaeen mourning ceremonies despite attempts to magnify security concerns after the recent unrests in Iraq.

Millions of others inside Iran who could not travel to Iraq commemorated Arbaeen in mosques across the country.

Arbaeen, which is the largest religious gatherings in the world, comes 40 days after Ashura, the martyrdom anniversary of the third Shiite Imam, Imam Hussein (AS).

Each year, millions of Shiites flock to Karbala, where the holy shrine of Imam Hussein (AS) is located, to perform mourning rites. Many of them also visit Imam Ali’s (AS) holy shrine in Najaf.

In the past few years, around 20 million pilgrims from all over the world, including Iran, have taken part in the mourning ceremonies in the Iraqi holy cities marking Arbaeen.

Unofficial reports say that the number of Iranians applying for a visa to go on the pilgrimage has, at least, tripled. The unrests in a number of Iraqi cities is suspected by Iranians to have spiraled by the US, Israel and Saudi Arabia to deter the Iranian people's Arbaeen pilgrimage and Iranian pilgrims intend to show that they are undeterred.

This year's Arbaeen ceremonies are held amid the western and Arab media's negative propaganda and exaggeration of the recent unrests in Iraq to dissuade the pilgrims from traveling to the country but the bordering areas of Iran near Iraq are full of eager pilgrims trying to arrive in Karbala for Arbaeen ceremonies.

Iranian officials have declared that this year's demands for Karbala visit in Arabaeen are 3 to 5 times more than the past years despite the media hypes about unrests in Iraq.

Calm has been restored in the Iraqi cities after a few days of protests in the past few weeks.

According to Fars News Agency, Muslims from across the world, including Iran, attended the 100-km rally, while hundreds of thousands more joined them on the way to Karbala and to the holy shrine of Imam Hossein (PBUH).

Large numbers of different student and popular groups are still joining the rally.

In September, Shiite pilgrims of Iraq and other countries, including Iran, flocked into Karbala, some 100 km South of Baghdad, and into Kadhmiyah in Northern Baghdad to commemorate Ashoura, which marks the martyrdom of Imam Hossein (PBUH), grandson of Prophet Mohammad (PBUH) and the third Shiite Imam.