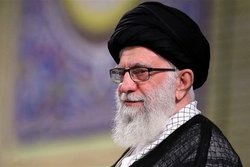 Supreme Leader of the Islamic Revolution Ayatollah Seyed Ali Khamenei lauded the young Iranian people for their massive presence in Arbaeen ceremony (40th day of mourning for Imam Hossein after he was martyred on the day of Ashoura over 13 centuries ago).

RNA - A mourning ceremony marking the Arbaeen was held at the Hussayniyah of Imam Khomeini (RA) with groups of university students as well as Ayatollah Khamenei in attendance in Tehran on Saturday.

At the end of the ceremony, the Supreme Leader delivered a brief speech in which he expressed gratitude for the enthusiastic and sincere mourning ceremony held by the youth.

"The sincerity and (spiritual) illumination of you dear ones are very precious and I always ask God to keep you and me perpetually steadfast on the right path," he said.

"If you are steadfast on the right path, the country will improve, and the world and the mankind will benefit from the outcomes," Ayatollah Khamenei underlined.