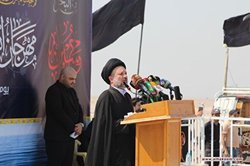 The convention “From the Sea to the Killing Place” was held by the office of Ayatollah Hakim in Basra province.

RNA - The convention “From the Sea to the Killing Place” was held in Basra province by the office of Sayyed Muhammad Saeed Hakim, a source of emulation.

Hujjat al-Islam Sayyed Ezzodin Hakim, the son of Ayatollah Hakim, spoke in this ceremony and some poets of the field of Ahl al-Bayt (AS) recited their poems in this ceremony.

It should be mentioned that the said ceremony is the seventh convention held each year since seven years ago.

In the Presence of the Grand Leader of the Islamic Republic in Imam Khomeini Hussainiya: