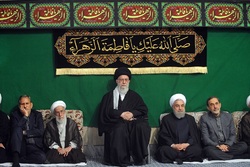 The mourning ceremony of the martyrdom of Hazrat Zahra (AS) was held in the presence of the grand leader of the Islamic Republic in Imam Khomeini Hussainiya.

RNA - In the presence of the Supreme leader of the Islamic Republic, the mourning ceremony of the martyrdom of Lady Fatima-Zahra (AS) was held in Hussainiya of Imam Khomeini.

Thousands of people and some officials attended the ceremony, and Hujjat al-Islam Rafiee, the speaker of the ceremony, mentioning the dimensions of the economic resistance of Hazrat Zahra’s the tradition, said, “the Islamic economy is based on spirituality, morality and the emphasis on continuous effort and work, sacrifice and avoidance from selfishness and self-orientation.”

Stating that the life of Lady Zahra was mingled with patience, austerity and contentment, the speaker of the ceremony added, “if the society puts up resistance on the Right path, the Heavenly blessings will definitely be bestowed upon it.”

Mr Salahshoor also recited some laments on the sad martyrdom of Hazrat Fatima Zahra (AS).

Last session of this spiritual ceremony will be held on February 10 in Imam Khomeini Hussainiya.