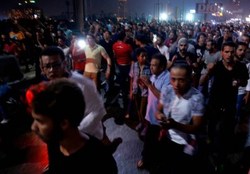 A leading rights group called for the "immediate release" of those arrested in Egypt following rare protests on Friday demanding the resignation of Egyptian President Abdel Fattah el-Sisi.

RNA - In a statement on Saturday, Human Rights Watch (HRW) called on the Egyptian government to "protect the right to peaceful protest", after dozens were arrested for demonstrations across the country, Al-Jazeera reported.

The rare display of dissent against el-Sisi's rule erupted in the capital, Cairo, and other cities, where hundreds of Egyptians took to the streets, chanting slogans including "Leave, Sisi!" and demanding the "fall of the regime".

At least 74 people have been arrested, a security source told the AFP news agency, while plain-clothes police officers patrolled the streets of downtown Cairo.

"The authorities should recognise that the world is watching and take all necessary steps to avoid a repetition of past atrocities," he added.

El-Sisi, who flew on Friday night to New York to attend the United Nations General Assembly next week, is yet to comment on Friday's protests.

"Egypt's international partners, as well as the UN secretary-general, should call on the Egyptian government to respect people's rights to freedom of expression and assembly," the HRW statement read.

After overnight clashes with the protesters, security forces on Saturday maintained tight control on Tahrir Square, the epicentre of the 2011 Arab Spring revolution that unseated longtime leader Hosni Mubarak.

The country effectively banned protests under a 2013 law and a state of emergency is still in full effect.

Al-Jazeera's Jamal Elshayyal said the Friday protests were reminiscent of the Arab Spring, noting, "This is borne out of frustration and anger at misgovernance and oppression at the lack of a future for a large section of Egyptian society of which a vast majority is young."

He, however, added that the difference this time was the "spontaneity" of the protests, which occurred "almost organically, with no political force behind it".

Al-Jazeera is banned from reporting inside Egypt. The Qatar-based network's reporter Mahmoud Hussein has been detained in the country for more than 1,000 days without any formal charges.

Discontent over rising prices had been swelling in Egypt, where el-Sisi's government has imposed strict austerity measures since 2016 as part of a $12bln loan package from the IMF.

Nearly one in three Egyptians live below the poverty line on less than $1.40 a day, according to official figures released in July.

The protests on Friday came after an online call put out by Mohamed Ali, an exiled Egyptian businessman, demanding el-Sisi be toppled.

The construction contractor has been posting videos from Spain that have gone viral since early September, accusing el-Sisi and the military of rampant corruption.

The president flatly denied the allegations last week at a youth conference and sought to assure the Egyptians that he "was honest and faithful" to his people and the military.

In Ali's latest video posted on Friday morning on his growing social media accounts, he urged the Egyptians to head to the streets after a highly anticipated Super Cup football match between Cairo powerhouses, Al Ahly and Zamalek.

Thousands shared footage on social media documenting the demonstrations, which sprang up in several cities, including Alexandria, Mahalla, Damietta, Mansoura and Suez.

"This is the first time people take to the streets in many years but I am not sure it will be the last," Ali stated.

Under el-Sisi's rule, the authorities have launched a broad crackdown on dissidents, jailing thousands of politicians, activists, journalists, popular bloggers and others.

He has regularly invoked security and stability as hallmarks of his reign in contrast to the situations in regional hot spots such as Iraq, Libya and Syria.

During last week's youth conference, el-Sisi again took the opportunity to warn of the dangers of protesting.

On Friday night, TV host Amr Adib lambasted Ali, the businessman, showing footage of him allegedly in a drunken stupor.

Adib urged his fellow countrymen to "take care of the country ... because the Muslim Brotherhood wants to raze it to the ground".

Egyptians quickly took to social media to criticise Adib, a vocal backer of Mubarak during the 2011 revolution, for dismissing the protesters as "people against the country".

The group, once considered one of Egypt's most organised political forces, was outlawed as a "terror" group in 2013 after Morsi's overthrow.

Morsi died in June after collapsing inside his soundproof glass cage while on trial in a Cairo courtroom on espionage charges.