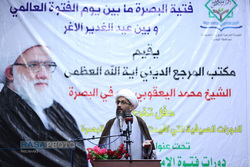 The graduation ceremony of six thousand students from summer programs was held in Basra Province.

According to the correspondent of Rasa News Agency in the holy city of Najaf, more than six thousand students graduated from summer programs held by the office of Ayatollah Yaqubi.

The programs were held on religion, ethics, religious rules and sports.

In the final part of the ceremony, the selected top students were rewarded.

It should be noted that more than 118 programs have been held in different areas of Iraq so far, and girls have formed a third of those students attending in these courses.