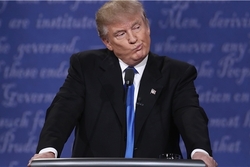 President Donald Trump on Friday defended the raids carried out by Immigration and Customs Enforcement (ICE) this week in Mississippi, calling them "a very good deterrent".

RNA - Trump told reporters at the White House that the raids dissuade immigrants from entering and residing in the country illegally, The Hill reported.

“I want people to know that if they come into the United States illegally, they’re getting out. They’re going to be brought out. And this serves as a very good deterrent," he stated.

ICE Spokesman Bryan Cox told reporters they were "returned to the place where they were originally encountered".

Cox added that detainees with child care issues who were not subject to mandatory detention would be "expeditiously processed and returned to the point of apprehension so that they can get to their child or other dependents".

Still, critics say the raids were unnecessary and politically motivated.

"Once again, this Administration has separated families and left innocent children without their parents, simply for political purposes motivated by racism and prejudice," said Domingo Garcia, president of the League of United Latin American Citizens, adding, "President Trump is targeting immigrant families so that he can play the race card and score cheap political points in the 2020 elections."

"The reason is because you have to go in, you can’t let anybody know, otherwise when you get there nobody will be there,” Trump told reporters when asked about the surprise raids.

House Homeland Security Committee Chairman Bennie Thompson (D-Miss.) on Friday wrote a letter to ICE condemning the raid in his home state that resulted in hundreds of arrests.

Thompson wrote the letter to acting ICE Director Matthew Albence to express "outrage" over the raid that "left an unknown number of children without their parents".

"At a time when this country is grieving due to two domestic terrorist shootings, your agency has instead seemingly deliberately disregarded its own long-standing guidelines and carried out another form of family separation," he said, adding, "The blatant lack of planning and resulting chaos calls into question the true motivation behind these worksite enforcement operations."

He asked in the letter for information including the number of children affected and the number left without a caregiver.