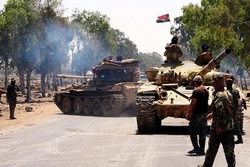 The Damascus Army is preparing for fresh military operations against terrorist groups in Northern Hama as the Syrian government has dispatched massive military convoys to the region.

The Syrian Army is preparing for fresh military operations against terrorist groups in Northern Hama as the Damascus government has dispatched massive military convoys to the region.

The Arabic-language Al-Alam news website quoted an informed military source as saying that the Syrian Army has dispatched massive military convoys comprising tens of vehicles carrying military equipment and Syrian Army troops to their military positions in Northern Hama, including Shirz and al-Tarmiseh near Mahradeh in Northern Hama.

It said that the Russian-Syrian fighter jets have destroyed the terrorists’ military positions in al-Latamineh town in Northern Hama and Khan Sheikhoun in Southern Idlib to the city of Ariha along Aleppo-Lattakia Highway.

Meantime, the Syrian and Russian air and ground forces in joint operations heavily pounded and destroyed the military convoys of Tahrir al-Sham al-Hay’at and Jeish al-Izzeh terrorists on Idlib-Hama road while they were heading to confront the Syrian Army in Northern Syria.

The source also reiterated that a military commander of Jeish al-Izzeh named Yasser Ahmad al-Saloum was also killed during the joint military operations by Russia and Syria.

A military source said that the Syrian Army found a mass grave containing 13 corpses near the city of Navi in Western Dara’a.

The source noted that the Syrian Soldiers had been killed in clashes with the terrorists in Dara’a region over the past six years.

The Syrian Army has discovered a number of mass graves containing bodies of Syrian soldiers after liberation of the Southern parts of Syria since last year.