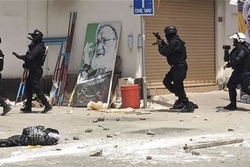 RNA - "Bahrain's state terrorism needs to be noticed by the world and the governments, organizations, parliaments and parties," al-Wefaq party, which has been banned from conducting any activity by the ruling Al-Khalifah regime, said in a statement on Saturday.

It added that the al-Khalifa regime does not respect the human rights and international laws and ignores all agreements and humanitarian demands.

According to Fars News Agancy, Ahmad al-Malali, 24, and Ali Hakim al-Arab, 25, were executed at Jaw prison, South of the Bahraini capital Manama, on Friday after private meetings with their families.

Al-Malali and al-Arab were sentenced to death last year in a mass trial along with another 56 men who were convicted and given jail terms on "terrorism crimes". They were arrested separately in February 2017.

The Public prosecutor's office announced the men were put to death on charges of possessing firearms and killing a police officer.

The Bahrain Centre for Human Rights announced that the families of the two had received phone calls from Jaw prison for private visits - a procedure that usually precedes execution.