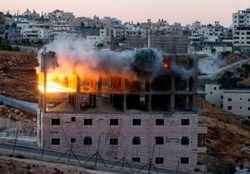 People have staged a demonstration outside the residence of Israeli Prime Minister Benjamin Netanyahu in Jerusalem al-Quds to protest the Israeli regime's demolition of Palestinian homes in nearby Wadi Hummus.

RNA - The protesters carried signs condemning Israel's actions in the occupied Palestinian territories and chanted slogans against the regime.

Moshe Raz, a member of the Knesset for the left-wing party Meretz, characterized the demolitions as a "crime".

On Monday, the Israeli military began demolishing a cluster of Palestinian homes it says were built illegally too close to the separation barrier in the occupied West Bank.

In June, Israel’s supreme court rejected a petition by the owners to cancel the demolitions. A deadline for the residents to abandon the houses expired on Friday.

According to Press TV, Israel claims the owners had failed to obtain “building permits” from the regime.

The residents, however, say they did not need Israeli permission to build their homes because they had received approvals from the Palestinian Authority, which is tasked with running the West Bank’s affairs.

The Palestinian Ministry of Foreign Affairs and Expatriates on Sunday called upon the International Criminal Court (ICC) to launch an investigation into the Israeli regime’s mass demolitions in the neighborhood.

Israel ‘the main cause of terrorism in world’