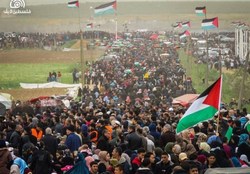 The Israeli forces killed a Palestinian citizen and wounded more than 50 others on the 68th Friday of the Great March of Return in the Gaza Strip, as Palestinian Authority President Mahmoud Abbas stated that he decided to stop abiding by the agreements signed with the Israeli side and to form a committee to implement the decision taken in this regard by the Central Council of the Palestine Liberation Organization (PLO).

RNA - The Ministry of Health announced that Ahmad al-Qarra, 23, died after being shot in the abdomen East of Khan Younis city, Southern Gaza, while 56 protesters were injured by live ammunition and tear gas canisters, Palinfo reported.

Thousands of Palestinians on the 68th Friday of the Great March of Return marched along the border between the Gaza Strip and the 1948 occupied Palestinian territories to voice solidarity with the Palestinian refugees in Lebanon.

Since the start of the Great March of Return in late March 2018, the Israeli forces have killed 319 demonstrators and injured over 32,000.

It comes after Abbas declared an end to "all agreements, including security coordination" with Tel Aviv amid Israeli violations against the Palestinians. He made the announcement following an emergency meeting held at the presidential headquarters in the West Bank city of Ramallah on Thursday.

“We will not bow to any dictates or faits accomplis being imposed on the ground by brute force, specifically in Jerusalem,” Abbas said in press remarks on Thursday, describing Israel’s practices in the occupied territories as “illegitimate and wrong”.

“Our hands have always been extended for just, comprehensive and lasting peace; however, this does not mean that we should accept the status quo or surrender to the occupation’s measures,” the president noted, adding, “And we will not go along with the deal of the century because Palestine and Jerusalem are not for sale and barter."

“There is no peace, no security and no stability in our region and the world without our people getting their rights fully, and no matter how long or short the time was, the obnoxious occupation would be routed and our deep-rooted state would obtain its freedom,” Abbas underscored.

According to the WAFA news agency, the meeting came specifically in response to the record demolition of 10 Palestinian apartment buildings in the Sur Baher village situated in the occupied West Bank earlier this week.

According to Fars News Agancy, the demolition has prompted international condemnation. The US, however, blocked a draft United Nations Security Council (UNSC) resolution denouncing Tel-Aviv on Wednesday.

The US Trump Administration also made sweeping aid cuts to the Palestinian territories last year.

The "Deal of the Century", formulated by President Donald Trump's son-in-law and senior adviser Jared Kushner is yet to be officially released. The so-called "peace deal" will reportedly deny Palestinians any right to a sovereign Palestinian state, while claiming to provide economic incentives in exchange.