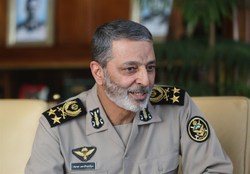 Commander of Iran's Army Major General Abdolrahim Mousavi underlined that his country will give a crushing response to any aggression by enemies.

RNA - "As it has been declared several times, the Islamic Republic of Iran is not after war against any country but has learned defense very well. As the commander-in-chief (Supreme Leader Ayatollah Khamenei) has stated, the era of hit-and-run has ended and if they hit a blow to us, they will receive a response ten times stronger," General Mousavi said in Tehran on Sunday.

He described the Islamic Revolution's military power in hard and soft components as significant and in West Asia region as decisive, and said the Iranian Armed Forces have optimized their old equipment and produced new and advanced weapons to be used in any possible confrontation on the ground, air and sea.

His remarks came after the Islamic Revolution Guards Corps (IRGC) Aerospace Force shot down an American spy drone over the territorial waters of Iran near the Strait of Hormuz at dawn on June 20.

According to Fars News Agancy, the incident sent "a clear message" to the US and other enemies that Iran will show a firm and crushing response to any aggression, Salami stated.