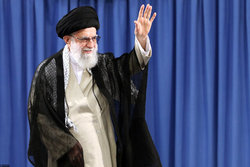 Leader of the Islamic Revolution Ayatollah Seyyed Ali Khamenei says Saudi Arabia is responsible for the safety of this year's Hajj Islamic pilgrimage and must guarantee that all pilgrims will be treated with respect.

RNA - Ayatollah Khamenei told Iranian Hajj officials on Wednesday that Riyadh faced the tall task of "ensuring  the pilgrims' safety without taking excessive steps in securing the areas" while "venerating all of the pilgrims."

Despite Riyadh's decision in January 2017 to unilaterally cut ties after protests outside its diplomatic premises in Tehran and Mashhad, both countries have made it clear that Hajj as a religious obligation should not be mixed with politics.

Safety of pilgrims has been one of the main issues discussed between Iranian and Saudi officials over the past years.

Iran has more than once stopped sending pilgrims to Hajj in the past few years after a series of incidents that either threatened pilgrims' safety or violated their dignity.

In September 2015, a deadly human crush occurred during Hajj rituals in Mina, near Mecca. Days into the incident, Saudi Arabia published a death toll of 770 but refused to update it.

Unofficial sources, based on individual reports from countries whose nationals had been among the victims of the crash, put the death toll at almost 7,000 people.

Iran said about 465 of its nationals lost their lives in the incident.

Earlier that month, a massive construction crane operated by the Saudi Binladin Group conglomerate collapsed onto Mecca’s Grand Mosque, killing more than 100 pilgrims, including 11 Iranians, and injuring over 200 others, 32 of them from Iran.

Back then, Iranian officials said Riyadh had provided “written assurances” that it would meet all of Tehran’s conditions with regard to ensuring security for Iranian pilgrims in future Hajj ceremonies.

Iran once again suspended Hajj flights to Saudi Arabia in the same year, after two Saudi security guards were accused of harassing two Iranian teenagers on their way home after visiting Mecca with their family.

Following Tehran's objections, a criminal court in the Saudi city of Jeddah, the main gateway for pilgrims headed to Mecca and Medina, handed the men four-year prison terms. They were also to receive 1,000 lashes according to reports.

The Leader also pointed to America's hostility towards the truths of Islam and said: "The vicious political, social, cultural, economic and security aggression of global bullies against Muslim nations showed how deep their animosity was towards Islamic teachings."

He said the arrogant powers knew that Islamic teachings went against all they stood for.

"The Islamic communities' commitment to the principles of Islam and their resistance against bullying were going to lead to the victory, advancement, prosperity and redemption of the Islamic Ummah," the Leader added.