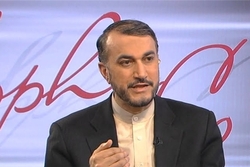 Advisor to the Iranian Parliament Speaker Hossein Amir Abdollahian said that US President Donald Trump should change behavior towards Supreme Leader of the Islamic Revolution Ayatollah Seyed Ali Khamenei and the Iranian people to see a breakthrough.

RNA - "The only way for Trump's salvation is changing behavior towards the strong logic of the Leader and the great Iranian nation," Amir Abdollahian wrote on his twitter page on Sunday.

He noted that Trump is not in a position to even speak about sanctioning the Iranian Leader, and said, "He wants to do something to attract only and only the attention of Imam (Ayatollah) Khamenei but he has received the response before."

US Treasury Secretary Steven Mnuchin said Monday that the US would blacklist Iranian Foreign Minister Mohammad Javad Zarif and block “billions” more in Iranian assets as part of expanded sanctions.

In response, Iranian President Hassan Rouhani lashed out at the US for imposing sanctions against Ayatollah Khamenei as an unwise move, saying that the White House had become mentally disabled.

"No government, if it has the minimum wisdom and prudence, will sanction the highest-ranking official, not only in political field but also in the religious, social and spiritual areas, of a country who is the leader of not only Iran but also lovers of the Islamic Revolution and the Shiites in the Muslim world across the world," President Rouhani said, addressing the health ministry officials in Tehran on Tuesday.

He described the move as stupid, and asked the US officials of the goal pursued by the sanctions.

"You sanctioned the leader of a country not to travel to the US? It is ridiculous. We do not allow them (the Americans) to come (to Iran) and then you tell us that you should not come (to the US)?"

President Rouhani underlined that the Iranian Leader is not in possession of billions of dollars in its foreign accounts like other world leaders to be frozen by the US and he has only a simple house and a religious hall (Hosseiniyeh).

"The US sanctions are crime against humanity. The US recent measures indicate their ultimate failure. The new US measures are the result of their frustration and confusion over Iran. The White House has mental disability," he added.

In relevant remarks earlier this month, Ayatollah Khamenei rejected the US proposal for negotiations as a "deception", warning that Washington aimed to disarm the Iranian nation.

"The US proposal for talks is a deception and when the enemy has not been able to attain its goal, it proposes talks imagining that the Iranian nation is naïve, and says that the Iranian nation should make progress. Of course, this nation will certainly make progress but without you (the US) and on the condition that you do not approach this nation," Ayatollah Khamenei said, addressing the judiciary officials in Tehran.

According to Fars News Agancy, he said that the main goal pursued by the US proposal for talks is disarming the Iranian nation and destroying its power components, and added, "If you accept their words in negotiations, the (Iranian) nation will heavily suffer and if you do not accept them, the current political hues and cries, propaganda and pressures will continue."

Ayatollah Khamenei also referred to the US instrumental use of human rights to attain its goals, and said Washington cannot speak about human rights as it has killed nearly 300 innocent Iranian passengers on board Flight 655 in 1988 and is collaborating with the Saudis in their crimes against the Yemeni people.

He also blasted the Trump administration as the most hated and villainous government in the world for insulting and raising allegations against the Iranian nation, and said the people in Iran are not taken aback by such behavior by the US and do not withdraw from their goal and causes.