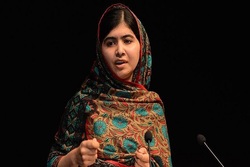 Roberge posted a photo on Twitter Friday that showed him standing with the hijab-wearing Pakistani activist, an honorary Canadian citizen. The picture was taken at a G20 planning session they attended recently in France. Ironically, the pair discussed access to education.

The picture drew cries of hypocrisy and Twitter outrage, given the Bill 21 law.

“Mr. Roberge, how would you respond if Mme Yousafzai wanted to become a teacher in Quebec?” asked a reporter, Salim Nadim Valji, over Twitter.

Roberge responded to the question by saying it would be a “huge honour” if Malala taught in Quebec, but as in other “open and tolerant countries, teachers can’t wear religious symbols while they exercise their functions”.

Yousafzai survived a bullet in the head by the Taliban in 2012 for daring to speak out for girls' education. The brazen attack on Yousafzai, who was 15 at the time, sparked outrage in Pakistan and internationally.

“Did you tell her that in Quebec, women dressed like Malala do not have access to certain jobs in the public service? Thanks to your government,” another Twitter user said in a post that reflected the posts of many.

However, late last month Roberge noted while the law must be respected in schools, there will be no inspectors sent around to enforce Bill 21.

A legal challenge to Bill 21 has been launched by the Canadian Civil Liberties Association and the National Council of Canadian Muslims. The groups contend that Bill 21 unfairly targets Muslim women.