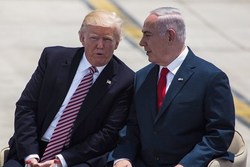 The Israel lobby in the United States is pushing the administration of President Donald Trump to launch war against Iran because the regime in Tel Aviv does not want to fight Tehran itself, according to E Michael Jones, an American writer and former professor.

RNA - A new opinion poll shows that a vast majority of American voters oppose a military conflict with Iran and express support for US President Donald Trump’s decision last month not to launch a military strike against the Islamic Republic.

The Harvard CAPS/Harris poll, released to The Hill newspaper on Tuesday, found that 78 percent of voters said they believed Trump’s decision to call off the strike on Iran was the right move.

The survey also found that 57 percent of respondents were against military confrontation with Iran if the US was not directly attacked by the country.

“A recent poll taken in the United States says the majority of the people there supported Donald Trump’s decision not to attack Iran. This has been obvious to me for years now,” Jones told Press TV on Friday.

“The next question is, well if the majority of the people are against it, who is in favor of it? And the answer to that, of course, is the Israel lobby. The Israel lobby controls the Congress. It controls the president to a certain extent, and the extent is precisely what we are beginning to see now, when Trump called back the attack with about ten minutes to go. This happened because he thought 150 people would die and this was not proportionate to Iran’s downing of an unmanned drone,” he added.

“So the question is now that we know this, how we are going to proceed? Donald Trump has painted himself into a corner in the Middle East because of his support for Israel. Israel wants the United States to fight Iran because Israel does not want to lose any soldiers, or does not want to take the time or effort to fight Iran itself,” he stated.

Tensions have been running high between the two countries since Washington’s decision in May last year to abandon the 2015 Iran nuclear deal and reimpose sanctions on Tehran as part of a “maximum pressure” campaign aimed at forcing it to renegotiate a new deal that addresses its ballistic missile program and regional influence as well.

The US has also sent warships, bombers and additional troops to the region in the wake of suspicious tanker attacks in the Sea of Oman, which it has blamed on Iran without providing evidence.

Tensions between Washington and Tehran hit a new high after Iran shot down a US surveillance drone on June 20 following its violation of Iranian airspace.

The US president said a day later that he had ordered and then reversed a decision to strike Iran after the drone incident, claiming that he had learned 10 minutes before the US strike that 150 Iranians would die as a result.

Tehran has time and again said that it does not seek military confrontations with the United States, yet stands ready to defend its interests in the region.