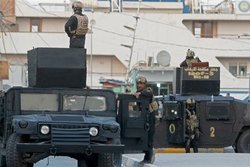 Asa'eb al-Haq Movement affiliated to the Iraqi popular forces of Hashd al-Shaabi warned that the US and Israel have hatched plots to disintegrate Iraq, using peaceful protests in the city of Basra.

RNA - The Arabic-language al-Ma'aloumeh news website quoted Secretary-General of Asa'eb al-Haq Sheikh Qais al-Khaz'ali as saying on Saturday that Washington and Tel Aviv seek to overthrow the Iraqi government and turn the country into a second Libya.

He added that the US wants to use the peaceful protests in Basra to decompose Iraq, warning that if their goal is materialized, the situation in Iraq will be the worst in the world and all of its cities will be separated from the country.

Meantime, the commander of Basra police announced in a statement on Saturday that mercenaries of foreign spy agencies want to turn the peaceful protests held to demand better government services in the region violent by attacking the public and private properties.

A number of people were injured in clashes with the local police amid protests against lack of basic services that recently took place in the Southeastern city of Basra, local media reported on Saturday, citing a source in the country's security forces.

According to Fars News Agancy, the Iraqi Al-Sumaria broadcaster reported that the local police dispersed protesters in the center of the city using tear gas and detained several people.

Police officers stopped protesters from getting closer to a house of a governor, according to the broadcaster.

Previous protests in Basra broke out in early September when people took to the streets to express their discontent over shortages of drinking water and electricity. Military troops were called in after demonstrations turned violent.