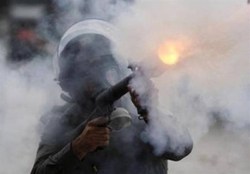 Israeli regime forces arrested Palestinian Minister of Jerusalem al-Quds Affairs Fadi al-Hadmi during a raid on his home in the occupied city.

RNA - Palestine’s Wafa news agency reported on Sunday that the Israeli forces searched Hadmi’s home at night and confiscated his mobile phone before taking him into custody.

Hadmi’s arrest was the first high-profile detention in Tel Aviv’s ongoing crackdown on the Arab neighborhoods in Jerusalem al-Quds, the report added.

Israeli Police Spokesperson Micky Rosenfeld confirmed that Hadami had been arrested and was being questioned for what he merely referred to as “activities in Jerusalem”.

Meanwhile, a source close to the Palestinian minister told AFP that the arrest was most likely linked to Hadmi’s recent activities that included accompanying Chilean President Sebastian Pinera during a visit to the Old City of Jerusalem al-Quds.

Israel occupied East Jerusalem al-Quds during the Six-Day War in 1967 and later annexed it in a move not recognized by the international community.

The Palestinians, however, view al-Quds’ Eastern sector as the capital of their future sovereign state.

The Israeli Foreign Ministry claimed that Pinera’s visit to the Al-Aqsa Mosque Compound with senior Palestinian officials had been in violation of diplomatic procedures and previous agreements.