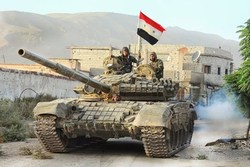 RNA - "The army has recently sent its special forces known as 'Tiger Force' together with massive military equipment to the battlefronts in Northwestern Hama and Southern Idlib, including the newly- liberated towns from the terrorist groups," the Arabic-language website of the Russian Sputnik news agency quoted a Syrian Army military commander as saying.

The Syrian Army has dispatched massive military convoys to Northern Hama to resume military operations in the region, the Arabic-language media outlets reported.

The Arabic-language website of the Russian Sputnik news agency quoted a Syrian Army military commander as saying that the army has recently sent its special forces known as 'Tiger Force' together with massive military equipment to the battlefronts in Northwestern Hama and Southern Idlib, including the newly- liberated towns from the terrorist groups.

It pointed to the arrival of elite forces of the Syrian Army in Northern Syria and their participation in upcoming operations, and said that the Syrian Army will most probably launch its military operation in the region.

The Ankara government is planning to build new military base in the Afrin region in Northwestern Aleppo as the Turkish Army and its allied militants continue their measures to separate Afrin from the Aleppo province, media reports said.

The terrorist group known as 'Olive Branch' affiliated to Ankara have cut over 1,000 trees in the town of Basfoun in Afrin region, the Xeber24 news website quoted local sources as saying.

According to Fars News Agancy, the sources underlined that the trees have been destroyed with the aim to set up a new military base by Turkey in a vast area in the Basfoun town.

Meantime, the Hawar News pointed to Ankara's attempt to drive a wedge between Afrin and mainland Syria by constructing a wall around the region. The length of the wall in the towns of Marimin, Jalbareh and Kimar has exceeded 4 kilometers.

The US-backed Syrian Democratic Forces (SDF) have increased economic pressures on the residents of the city of al-Tabaqa in Western Raqqa in a bid to suppress the Syrian citizens after they staged a popular uprising there, media reports said.

The Arabic-language Baladi news website quoted local sources in al-Tabaqa as saying that the city's residents are under immense economic pressures so that although tens of tons of flour has been stockpiled in the city's warehouses, the economy committee affiliated to the SDF blocks its distribution among residents.

They said that the residents of al-Tabaqa are living in critical conditions, adding that after the recent popular uprising there the SDF is trying to increase economic pressures on people in an economic war.

The popular uprisings against the US-backed SDF have increased over the past two weeks and they have taken serious economic measures against the civilians.