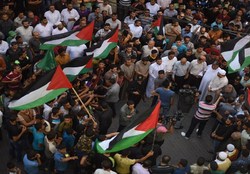 Thousands of Palestinians took to the streets in the various West Bank cities on Monday to protest the American-sponsored Bahrain economic workshop, which officially opens on Tuesday.

RNA - Rallies were held in Ramallah, Tulkarm, Hebron, Yatta, Halhoul, Nablus, Jenin, Bethlehem and other cities where participants hoisted the Palestinian flag and raised signs denouncing the workshop and American plans to undermine the Palestinian struggle for independence and statehood, WAFA reported.

Political leaders spoke at the rallies against the US schemes aimed at ending the Palestinian cause, which was the reason the Palestinian leadership has decided to boycott the Bahrain workshop and the so-called deal of the century.

The two-day workshop under the title Peace to Prosperity aims, as its authors say, to help the Palestinians and the region develop economically, while totally ignoring the political situation and Israel’s occupation of the Palestinian territory.

The Palestinians say that once the political situation is resolved and Israel ends its occupation leading to the establishment of an independent and sovereign Palestinian state, economic prosperity will follow, and not the other way around.