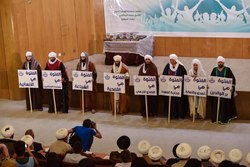 The first seminar on the international day of “Chivalry” was held in Iraq by Ayatollah Yaqubi.

According to the report of Rasa News Agency's correspondent in Iraq, the office of Ayatollah Sheikh Muhammad Yaqubi, an Iraqi scholar, held the first seminar on the international day of “Chivalry”.

The representative of the sources of emulation, religious and political figures, commanders of the Iraqi Popular Mobilization Forces and the heads of nomads attended in the seminar.

Hujjat al-Islam Sheikh Muhammad ash-Shavili, the chairman of Ayatollah Yaqub’s office, delivering a speech in the seminar, said, “The revival of the Day of Chivalry is done as the commemoration of the anniversary of the positive response of the youth to the call of the sources of emulation for the fight against the terrorist movements and protection from the values and chivalry concepts.

Saying that Iraq needs some new laws on the promotion and maintaining of peace and kindness in the society, he added, “The governmental centers and social institutes should devise some plans on the revival of the chivalry value and concepts among the youth. The government is supposed to highly attend the youth and create good occupations for them.”