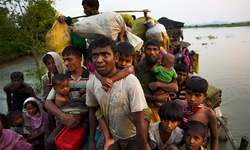 A report by the United Nations has censured the world body’s 'systemic failure' in spotting the early signs of Myanmar's deadly crackdown on Rohingya Muslims.

RNA - The 36-page report authored by veteran Guatemalan diplomat Gert Rosenthal was commissioned by UN Secretary General Antonio Guterres in February after the UN officials in Myanmar were accused of ignoring warning signs of escalating violence against the Rohingya that preceded their 2017 mass exodus.

“Without question, serious errors were committed and opportunities were lost in the UN system following a fragmented strategy rather than a common plan of action,” Rosenthal writes. “The overall responsibility was of a collective nature; in other words it can truly be characterised as a systemic failure of the United Nations.”

The Rohingya Muslims were subjected to a campaign of killings, rape, arbitrary arrests, and arson attacks by the military and Buddhist mobs in Rakhine mainly between late 2016 and August 2017.

The brutal campaign described by the UN as ethnic cleansing forced more than 700,000 Rohingya to flee their homeland since August 2017 and seek refuge in neighboring Bangladesh. There, they are confined to squalid, overcrowded camps and face forced return back to Myanmar.

Rosenthal’s report, which was seen by media outlets on Monday prior to its publication, says that while "it is difficult to assign responsibility for systemic failures," there is a shared responsibility "on the part of all parties involved" in not "conveying more forcefully the United Nations' principled concerns regarding grave human rights violations."

Critics said the UN's then-resident coordinator, Renata Lok-Dessallien, played down concerns about worsening abuses against the Rohingya in favor of prioritizing economic cooperation with Myanmar's government. The world body has denied those allegations.

Among the causes of the UN's failures, Rosenthal wrote a "dynamic of divisions rather than cohesion within the UN system" and "the absence of a clear and unified strategy".

He further said that conflicting reports on the situation were also sent to UN headquarters from the field.

According to the report, senior UN officials in New York could not agree on whether to publicly condemn escalating human rights abuses or pursue quiet diplomacy with the Myanmar's government.

"The United Nations system ... has been relatively impotent to effectively work with the authorities of Myanmar to reverse the negative trends in the area of human rights and consolidate the positive trends in other areas," Rosenthal said.

The Guatemalan diplomat noted that then-UN High Commissioner for Human Rights Zeid Ra'ad Al Hussein most consistently highlighted the rights violations taking place but this led to "some unease among those in the UN who favored the 'quiet diplomacy' approach."

Guterres has accepted the report’s recommendations "and is committed to implementing them so as to improve the performance of the United Nations system," UN spokesman Stephane Dujarric said.

"UN 'lessons-learned' reports about its failure to act in the face of mass atrocities have become almost routine," he added.