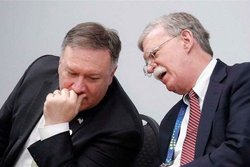 Extremists in the White House and warmongers in Saudi Arabia, the UAE and Israel are not expected to surrender to the realities and are still endeavoring to push Washington into war against Iran, a prominent Saudi analyst said.
RNA - Qassem Izzeddin wrote in the Arabic-language website of al-Mayadeen news channel that the attacks on the two oil tankers in the Sea of Oman proved that the US military equipment and forces in the Persian Gulf and their fleet of warships are not able to establish security in this region.

"The incidents which involve the oil tankers are likely aimed at coaxing the US fleet of warships into a war against Iran," he added.

Izzeddin referred to the incidents in Fujairah port last month and Saudi Arabia, Britain and the US rejection of Iran's demand for independent international inquiry into the case, and wrote that among the 200 military operations against the oil tankers in the Persian Gulf in the past years, Iran was not even blamed for a single one.

He added that attacks on oil tankers in the Persian Gulf do not serve Iran's interests as the country is at present after attracting the support of friendly states through deescalation efforts.

Meantime, Izzeddin stressed that radical elements in the White House and warmongers in Riyadh, Abu Dhabi and Tel Aviv are adamant to realities and will continue efforts to set the stage for pushing the US in war against Iran

Iran has strongly denied any involvement in the attacks.

Meantime, a prominent Russian expert said that the US had launched the Thursday attacks on two oil tankers in the Sea of Oman to spread Iranophobia, satisfy Israel and find a pretext for prolonged presence in the region.

"Allegations that Iran is behind the two oil tankers incident in the Sea of Oman are not believable," Head of the Russian Center for Iran Studies and senior analyst on regional issues Rajab Safarov said in an interview with Russia 24 news channel on Friday.

He described the US as the culprit behind the incident, and said in conditions that Iran along with two world powers, Russia and China, are after keeping the nuclear deal, Tehran will not resort to provocative acts against its interests.

Safarov added that the most important reason to blame the US for the incident is its interest in prolonged deployment in the Persian Gulf under the pretext of defending the Persian Gulf Arab states against what it calls as Iran's threat.

"There is also another important scenario. The US is now producing 12mln barrels of oil on a daily basis and it has not only become self-sufficient but also has turned into one of the most important exporters of oil and therefore, it wants to cripple oil transfer in the Persian Gulf and annihilate the European states and China's economy," he said.

"The US introduces itself as the savior of the world and the biggest guarantor of peace and security and Iran as the biggest enemy of peace and the world's economic lifeline by claiming to be rescuing Europe and the Arab and Asian states from an economic, political and geopolitical catastrophe and it will force them to bow to Washington and cut ties with Iran. Therefore, what you see is a scenario which fully benefits Trump and his supporters to force the world to bow to him," Safarov warned.

Asked about the possibility for military conflict between Iran and the US, he said that Washington does not enjoy the capability and power to attack Iran and they fear any military confrontation, adding that tens of ways are before Tehran to close the Strait of Hormuz but the Iranians do not want to adopt provocative measures.

Safarov said that by launching attacks against the oil tankers in the Sea of Oman, Washington pursues Iranophobia in the world to meet its economic interests, satisfy the Israeli lobby, pressure the Persian Gulf Arab states to plunder their petrodollars and hit a blow to Europe and China's economy.

The Japanese company that owns the ‘Kokuka Courageous’ tanker has said its crew spotted “flying objects” before the attack in the Gulf of Oman, contradicting US claims that the vessel was damaged by a naval mine.

Yutaka Katada, president of Kokuka Sangyo, told reporters on Friday that sailors on board the ill-fated oil tanker observed “flying objects” just before the incident in which the ship caught fire and was badly damaged. The giant vessel was hit twice, first near the engine room and then on its starboard side.

He suggested that those flying objects could have been bullets, and called reports of striking a mine “false.” Both points at which the ship was damaged were above her waterline, which couldn’t be so if it had struck an underwater mine.

The tanker was carrying petroleum products to Singapore and Thailand when it was attacked while sailing through the Gulf of Oman on Thursday. All 21 crew members abandoned the ship and were reportedly rescued by an Iranian vessel. While many details of the incident are still shrouded in mystery, the US was quick to blame Iran.

Another tanker, the Norwegian-owned ‘Front Altair,’ also suffered some damage while passing through the Gulf of Oman at around the same time. There have been reports of a torpedo attack on the vessel, but it is not yet clear from the firm’s statement whether it was attacked.

Suspicious doesn’t begin to describe what likely transpired this morning,” said Iranian Foreign Minister Mohammad Javad Zarif. As the day progressed, he hit back at the US accusations, saying Washington is trying to set up a false-flag attack in order to “sabotage diplomacy” and cover up their own “economic terrorism” against Tehran.

US Is The Greatest Threat to World Peace and Stability