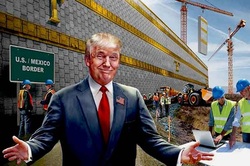 US President Donald Trump has once again attacked The New York Times, calling the American daily newspaper “Enemy of the People” for a report asserting that Mexico had agreed to take action at the border months before Washington announced potential tariffs.

RNA - Trump said in a tweet on Sunday that what the paper had claimed was "another false report."

"Another false report in the Failing @nytimes,” Trump tweeted. “We have been trying to get some of these Border Actions for a long time, as have other administrations, but were not able to get them in full, until our signed agreement with Mexico.”

Trump went on to say that Mexico for years had not been cooperative in talks but now he believes it wants to “get the job properly done.”

.....Mexico was not being cooperative on the Border in things we had, or didn’t have, and now I have full confidence, especially after speaking to their President yesterday, that they will be very cooperative and want to get the job properly done. Importantly, some things.....
— Donald J. Trump (@realDonaldTrump) June 9, 2019

The US president also signaled that there will be more announcements regarding the southern border “at the appropriate time.”

Moreover, Trump warned that if Mexico filed to carry through on its promises, “we can always go back to our previous, very profitable, position of Tariffs​.”

"But I don’t believe that will be necessary. The Failing @nytimes, & ratings challenged @CNN, will do anything possible to see our Country fail! They are truly The Enemy of the People!​," the president wrote in the last of four postings on the matter.​

.....there is not, we can always go back to our previous, very profitable, position of Tariffs - But I don’t believe that will be necessary. The Failing @nytimes, & ratings challenged @CNN, will do anything possible to see our Country fail! They are truly The Enemy of the People!
— Donald J. Trump (@realDonaldTrump) June 9, 2019

Last Friday, Trump announced that a deal had been reached with Mexico to avert imposing a series of 5 percent tariffs on Mexican goods beginning on Monday that would have eventually reached 25 percent.

The Times reported on Saturday that one of the components of the deal – Mexico agreeing to deploy its national guard troops to the Guatemalan border – had been decided on in March during discussions between former Homeland Security secretary Kirstjen Nielsen and Mexico’s Interior Secretary Olga Sanchez.

Building a wall was one of Trump’s most frequently repeated campaign promises.

He vowed to crack down on illegal immigration in part by building the wall on the border with Mexico but more than three years into his term, the US president has failed to fulfill that promise.

Congress refusal to provide the president with the $5.7 billion he needs to build the wall resulted in the longest government shutdown in the US.

On January 25, the president signed legislation to temporarily end the 35-day partial government shutdown, dropping his previous insistence on immediate funding for construction of the barrier.