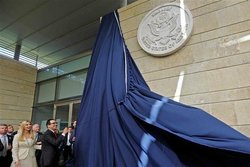 French Foreign Minister Jean-Yves Le Drian blasted on Saturday the yet-to-be-revealed US Middle East plan, calling it "an approach that cannot grant serenity", according to a report by The Times of Israel.

RNA - Speaking during his visit to Morocco, the foreign minister stated that President Donald Trump's approach to the Israeli-Palestinian issue "indicates" his peace plan whatever it turns out to be, will not leave both sides happy.

Le Drian pointed to Trump's unilateral recognition of Jerusalem as the Israeli capital in 2017, adding that France — and the rest of the EU — remains opposed to that decision. The move was condemned by the United Nations General Assembly and 15 out of 16 UN Security Council members.

The official Rabat, however, announced it will neither endorse nor condemn the plan until it is publically revealed. The contents of the plan remain unknown to the public.

The peace plan is expected to be revealed during the international economic conference in Bahrain's Manama on 25-26 June. During his presidential campaign, Trump promised to strike a "Deal of the Century", to end the conflict that has lasted for several decades.