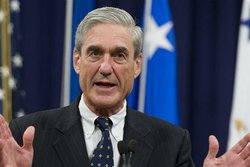 US Special Counsel Robert Mueller stated that he is resigning from the US Justice Department after the conclusion of the Russia investigation, stressing that charging US President Donald Trump was not an option that he could consider under Justice Department guidelines.

RNA - "We are formally closing the Special Counsel's Office and as well I'm resigning from the Department of Justice to return to private life", Mueller said during the press conference, World News reported.

Mueller told reporters that he felt it was “not appropriate” for him to publicly speak further on the matter, adding that his report should “speak for itself” and that he would not comment on any alternative “conclusions or hypotheticals” regarding Trump and the election.

Mueller released the report into alleged collusion between the Trump campaign and Russia in April.

Mueller cited indictments made against Russian citizens as proof of the alleged Russian interference in the election, although indictments themselves are not proof of anything. Mueller made that clear when he stated he would not be commenting "on the guilt or innocence of any defendant".

He also confirmed the findings of the report, saying there was "insufficient evidence" to charge a broad conspiracy between the Trump campaign and Russia.

Mueller stressed that his team had not made any determination as to whether Trump had committed a crime when it came to allegations that he may have obstructed investigation efforts and noted that since a sitting president cannot be charged with a federal crime while in office.

Charging Trump with a crime was therefore “not an option we could consider”, he said, adding that it would be "unfair to potentially accuse somebody of a crime” when they can’t defend themselves in court.

Notably, Mueller did not accuse Attorney General William Barr of misrepresenting his report when he presented a summary of its findings to the media back in March. He noted he appreciated that the AG had made the report largely public and said he did not question Barr's "good faith" in that decision.

Many Democrats and media figures had accused Barr of trying to spin the contents of the report in Trump's favor.

Trump reiterated that the Russia investigation was a "closed" case, arguing that nothing had changed after Mueller made his first and only public remarks on the probe.

"Nothing changes from the Mueller report", Trump said via Twitter in response to Mueller's remarks, adding, "There was insufficient evidence and therefore, in our country, a person is innocent. The case is closed".

Reacting on social media, many saw Mueller's comments about not being able to charge a sitting president as a signal to Democrats in Congress that they should begin impeachment proceedings against him. House leader Nancy Pelosi has angered many in her party for refusing to do so, however, oddly claiming the reason is that Trump “wants to be impeached” so that he can be vindicated.